The past eight days has been a non stop barrage of the new and unusual. I couldn’t be happier about these oddities I faced on my way to Kennedy Meadows South. The slower I go and embrace the far-out occurences, the deeper I get pulled into a state of appreciation and enjoyment.

Refueling in the small highway town of Independence, at the beginning of the week, should have been as boring as it sounds. Instead of the humdrum town I was expecting, it set the tone for an incredible week. Upon arrival I settled into a comfortable position in front of a gas station, poised in my usual vagrant manner. While chatting with a hiker buddy of mine we where approached by a local. Used to the ordeal to come we put on our ‘happy hiker faces.’ Locals love asking us questions and hearing about our adventures. Just as we where about to part ways he and his wife asked us an unexpected question, “Do you guys want to spend the night on our front lawn?” 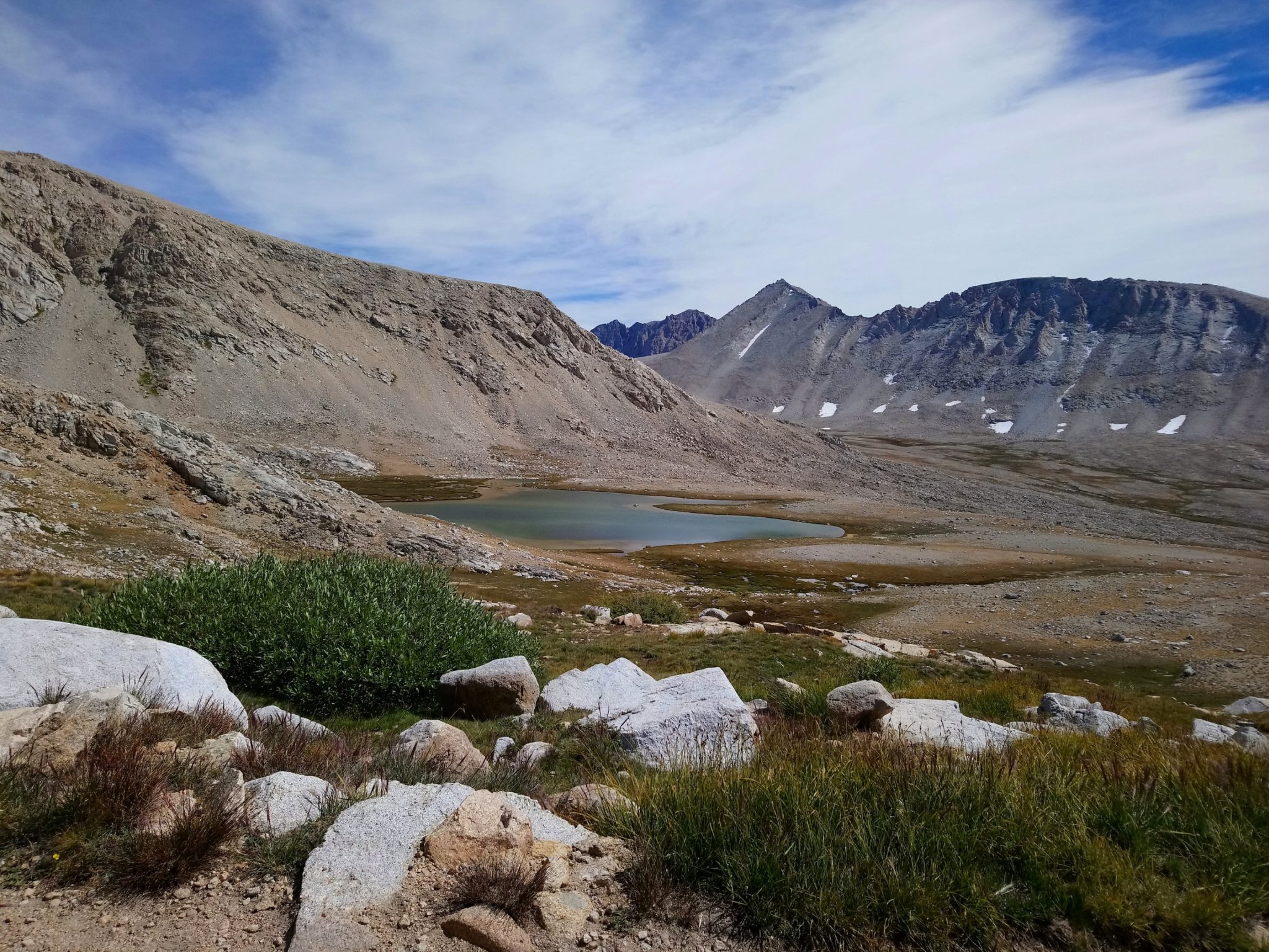 We obliged, with only slight reservations for a night full of awkward conversation, odd house rules, or an overly opinionated host. To our relief we encountered the opposite behavior. We spent a wonderful night getting a window into their lives and happily sharing some of our favorite trail stories. I was duly impressed by their willingness to let us use their shower. The hot water and soap, two items hikers rarely encounter, somewhat quelled the aura of hiker trash we had built up in weeks prior. The next morning, after providing us with breakfast and a failed attempt at kidnapping their dog, he would have made a fantastic trail companion, we got back on the trail. So began my next side adventure. 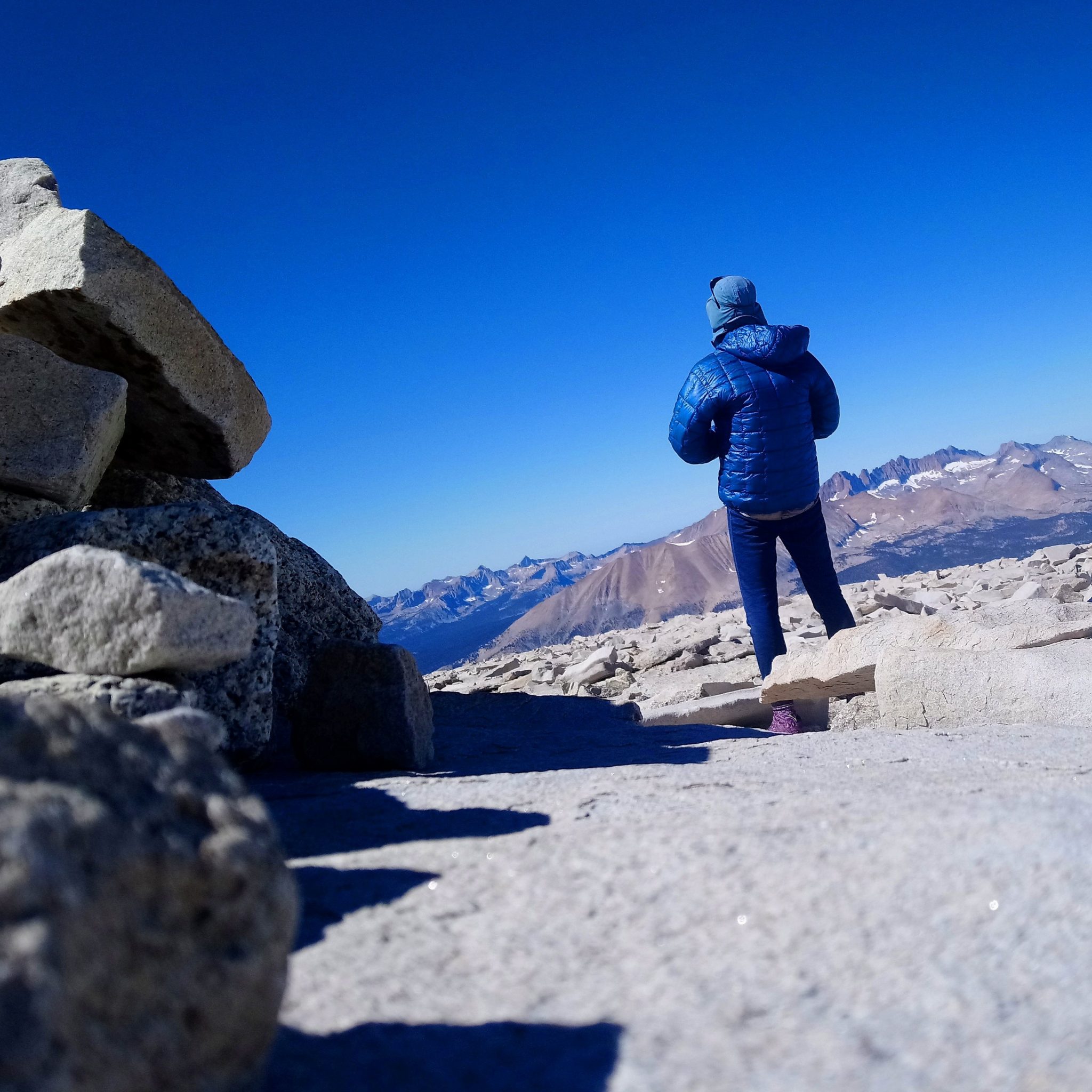 I was promptly informed ‘bad’ weather was headed my way and that attempting a summit of the highest peak in the 48 contiguous states, Mt. Whitney, might be tricky bordering foolish. The last time I had been up a mountain this high was in Colorado, Mt. Massive. It was after that trip, four years ago, I first articulated my desire to hike the Pacific Crest Trail. That days journal entry read, “I think I found my next trip […] the Pacific Crest Trail.” Even with the impending weather I had to give it a shot. 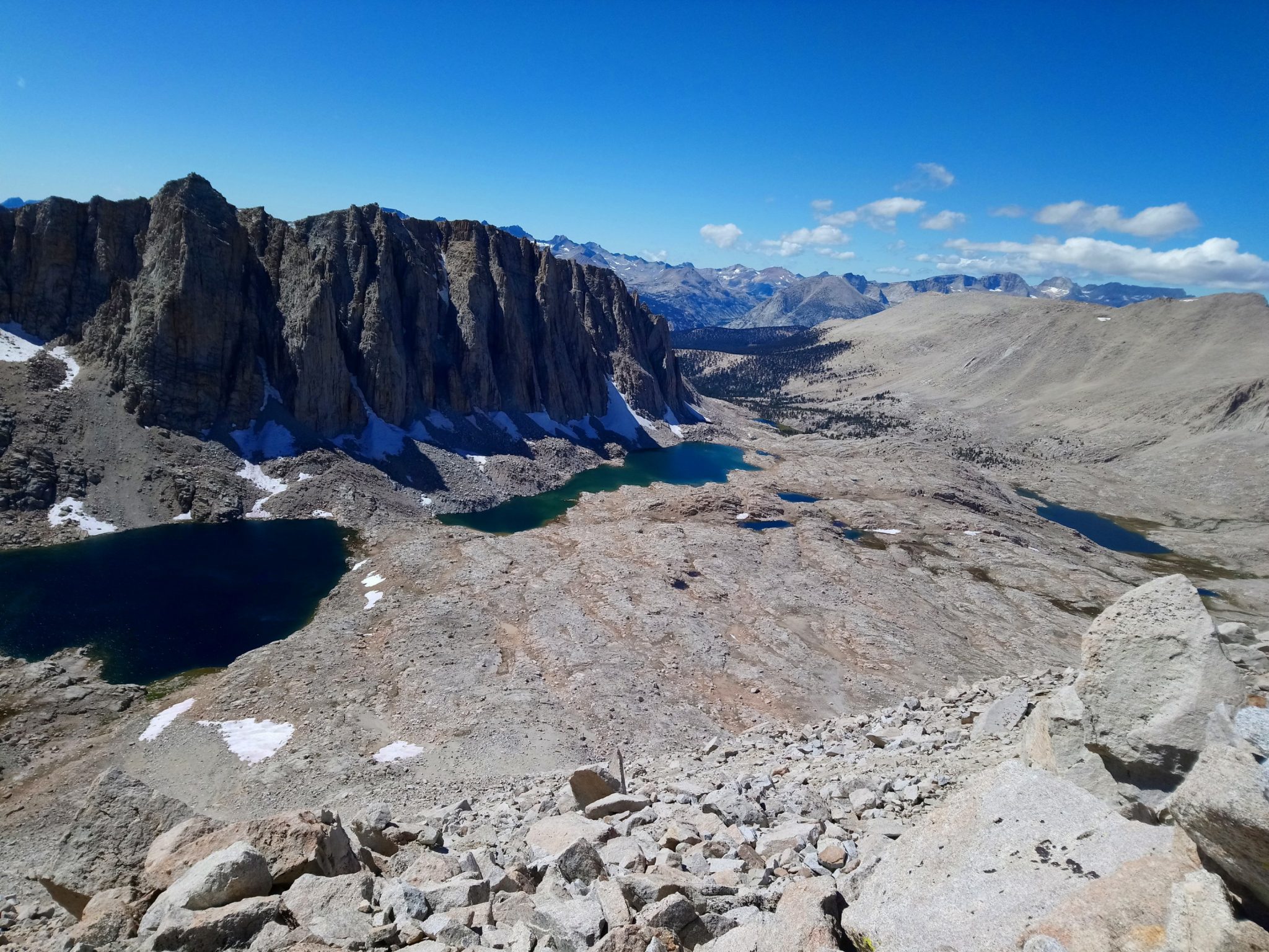 Thankfully I made it up with no problems, only the strain of walking up 4,500 feet. While the view from the top was breathtaking, partially due to the extreme altitude, that may have been my most conventional day this past week. As I should have guessed from the clouds forming that night, the weather I was warned about earlier had finally arrived. 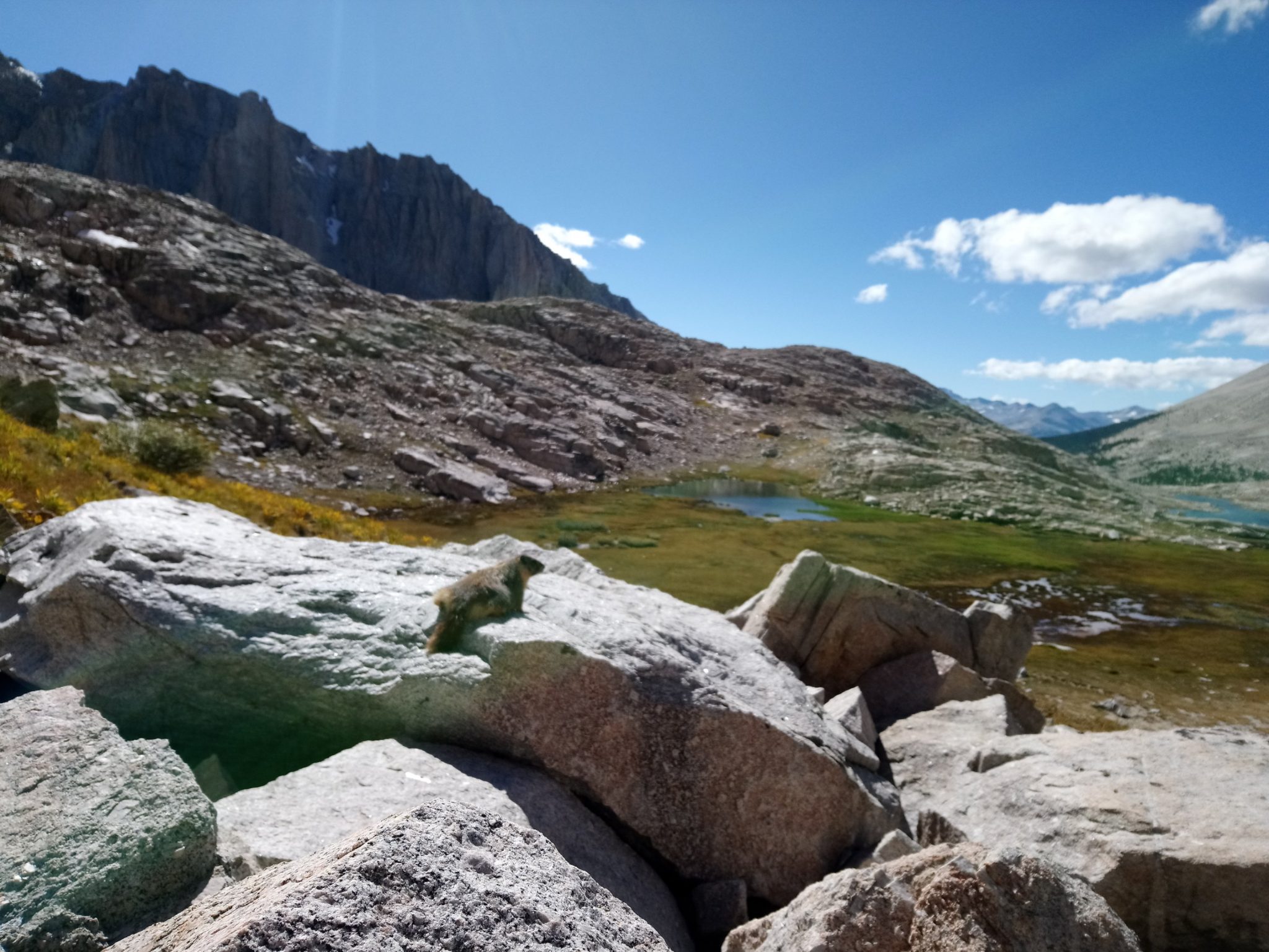 I could not have planned my last day in the High Sierras any better. As I mentioned in last weeks post, these mountains are known for sporadic weather. I woke up the next morning to snow, for most people that is an underwhelming piece of news, it was one of my most formative experiences on the trail. I have been passing snow drifts for hundreds of miles, 754 miles to be precise. But this was special, this was my first time being snowed on actively, ever. Throughout the day I gazed in awe at the thousands of snowflakes falling all around me. After twenty years of living on the west coast of California I finally got a taste of the magic fairy powder that I have heard so much about, being in the mountains for the occasion was just icing on the ice. 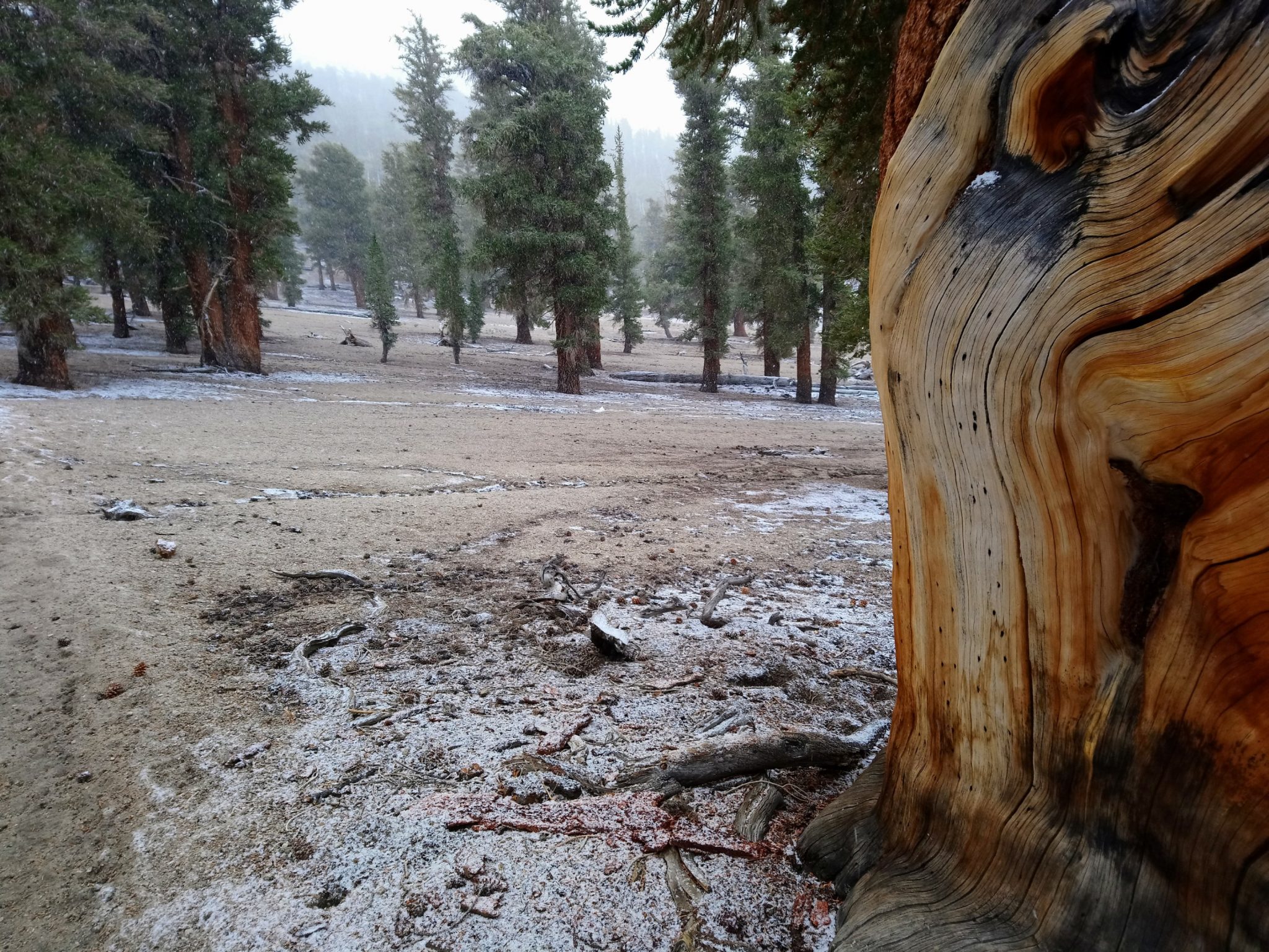 That evening when the snow died down Rosh Hashanah began, the Jewish new year. Every year that I can remember the holiday was spent in a synagogue, surrounded by family or friends and copious amounts of liturgy, this year was drastically different. I experienced an interpretive Rosh Hashanah. The day was inspired by one of my favorite philosophers, Philo of Alexandria. He was a revolutionary thinker who dared to interpret the Torah on a figurative level, as opposed to the dominant literalist approach of the time. It was a day full of singing with the birds, tuna and honey wraps (both traditional Rosh Hashanah foods) and meditating in complete isolation from everything but nature. 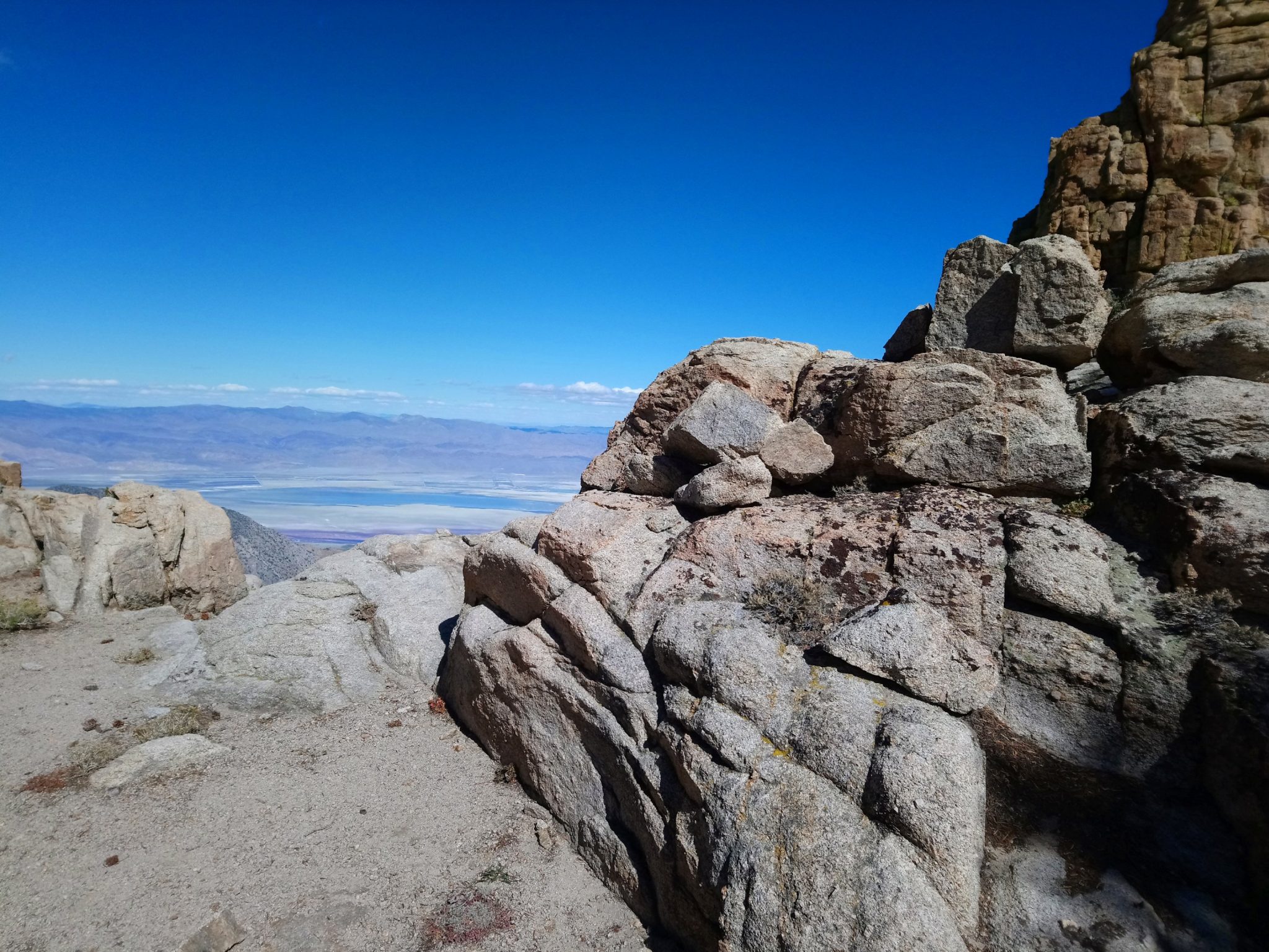 The complete isolation I felt that day was yet another unique element of my week. Ever since I got back on the trail, in South Lake Tahoe, I have been surrounded by swarms of hikers. That all changed after leaving the High Sierras. Over a period of nearly 48 hours I saw only a single person. This change is giving me the chance to deepen my experience on the trail, it will take some getting used to. As I work my way into the desert portion of this trip I am bracing myself for awe inspiring landscapes, scarce water, and everyone’s favorite desert tree,Yucca brevifolia, in Kennedy Meadows South. 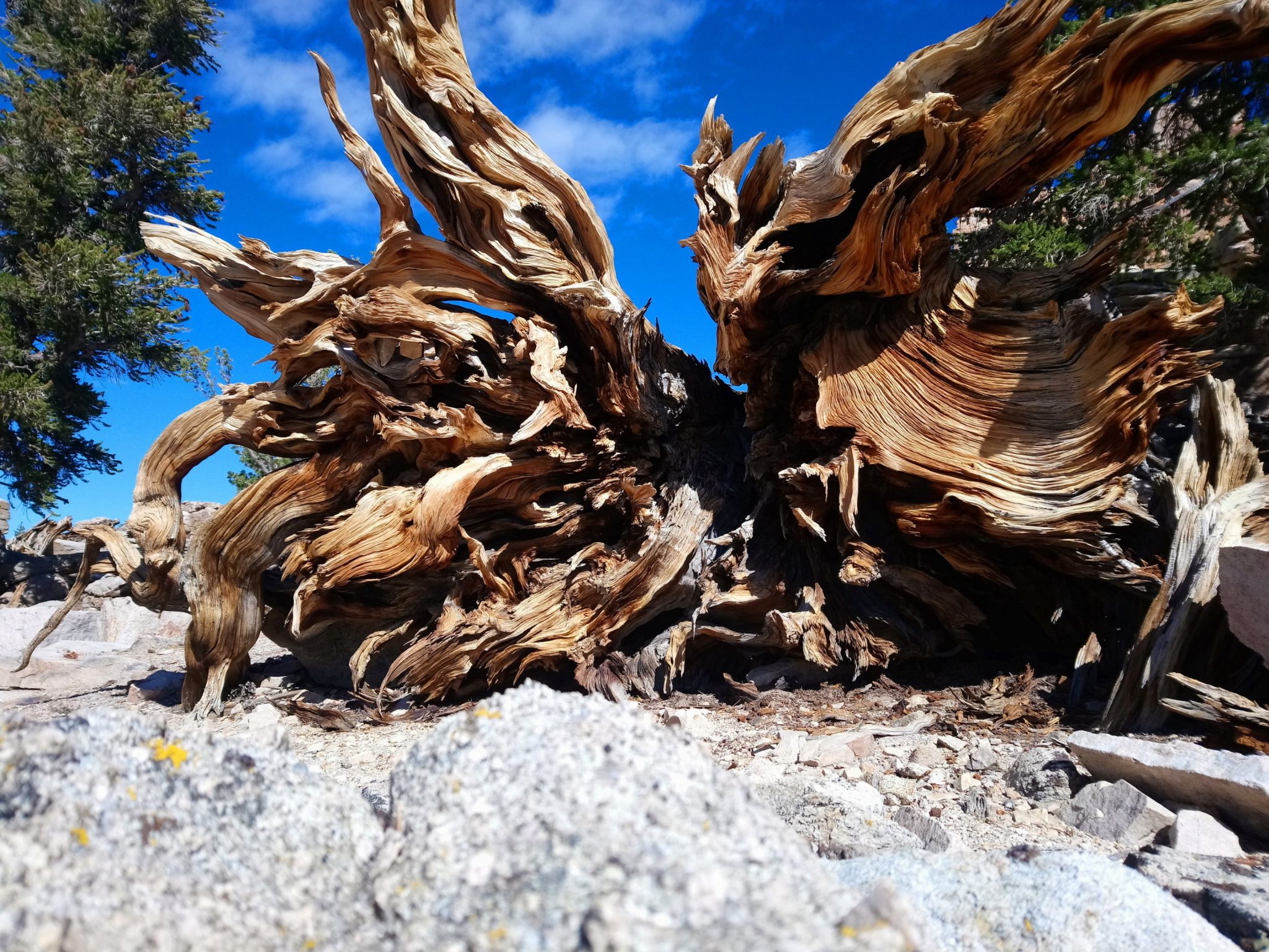 Sending my love from a relatively warm tent (no more nights at 10,000 feet) in Kennedy Meadows South, Slug

Each week I attempt to convey a more interesting and accurate portrayal of my week than ever before. I think I am getting better at articulating this trip but I could always use more help. I would like to hear your critical comments on my posts thus far. What do you like, what don’t you like, and where do you think I can improve? Whether you only have a few words or hundreds of pages of insight I would love to hear from you.