Every backpackers nightmare is an anonymous creature outside your tent, unrelenting in spite of scare tactics, camped along the Rogue River Trail we were stuck in the middle of this undesirable situation. The banging of a black bear trying to claw his way into our bear-proof food canister was one of the many thrilling and terrifying events the past five days held for us. The Rogue River Trail is a 35 mile jaunt through the Wild Rogue Wilderness. The feeling of redundancy that name instills is made up for by the areas incredible waterfalls, river, wildlife and much more. 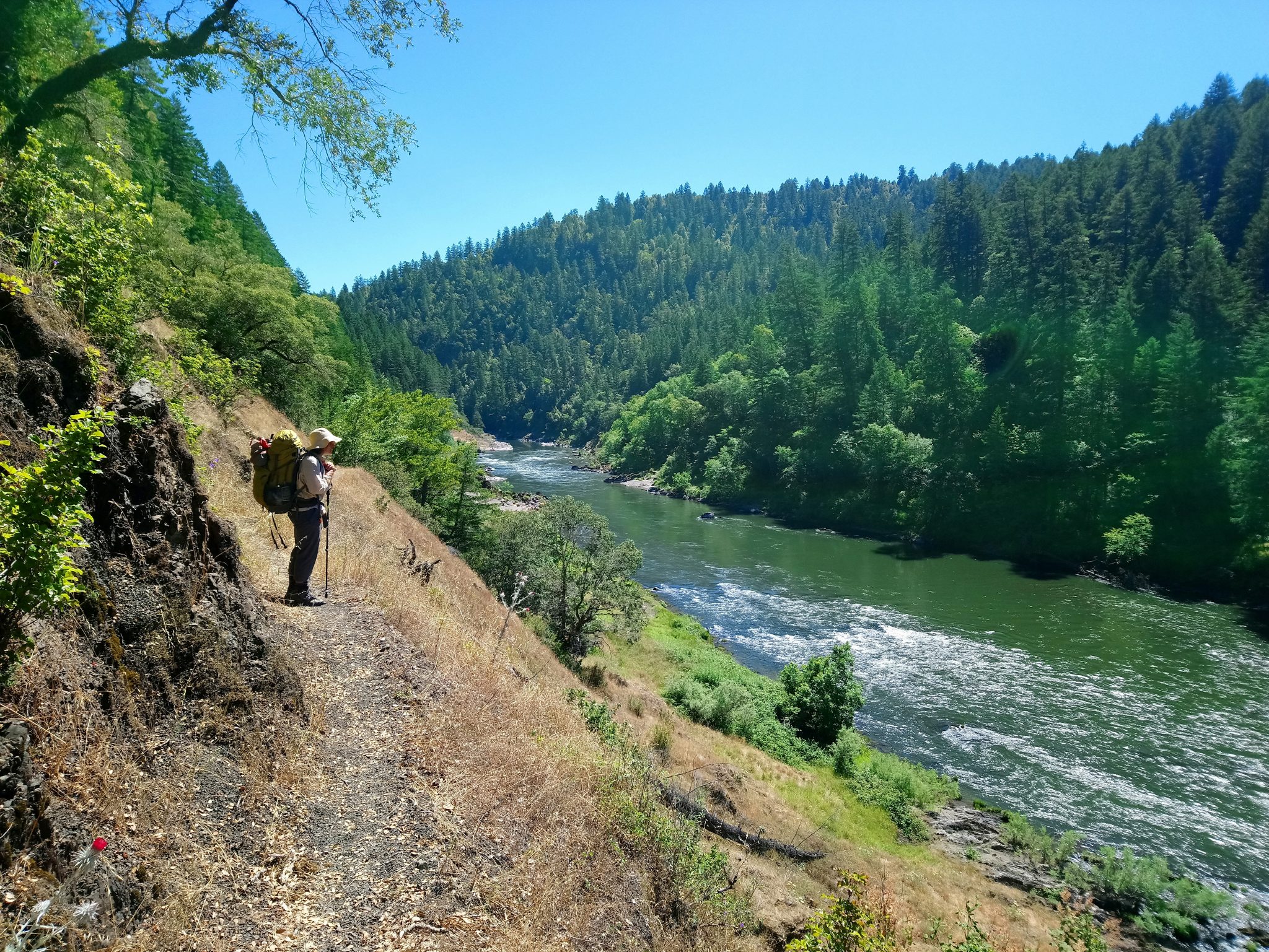 Day One on the Rogue River Trail:

Having recently completed the Lost Coast Trail in Northern California we planned to spend this week backpacking Klamath National Forest. We stopped in at the visitor center with the intention of making a trip to the “Devils Punch Bowl.” How could we pass it up with a name like that? We were disappointed to find out that the trail is currently inaccessible due to the particularly intense winter Northern California went through this year. We chose to cross the border and find our piece of trail in Oregon. Our new plan was to backpack along the Rogue River Trail.  The most common way of backpacking this trail is by parking at the northern trailhead and making a southbound journey. Running late and being natural contrarians we opted to start the hike at the southern trailhead, get through roughly half the trail, turn around, and make our way back down, a simple in and out. Arriving at the trailhead at 5pm we had a delicious dinner by the car and hiked in a mile to set up camp.

Neglecting the fact that we set up our tent in the midst of a cow pasture we awoke with a start to some curious neighbors. While cows are usually passive and are not known for meddling with humans, their sheer size insured our speedy breaking down of camp. The slow approach of a 1,600 pound animal was motivating. As we ate breakfast along the trail the areas rainforest feel provided much welcomed shade to the glaring sun. Anticipating the long days I will soon be facing during my hike of the Pacific Crest Trail, we decided to take this months slew of backpacking trips easy. In that spirit we set up camp after only two hours of hiking on what I have dubbed, “Coyote Poop Island.” 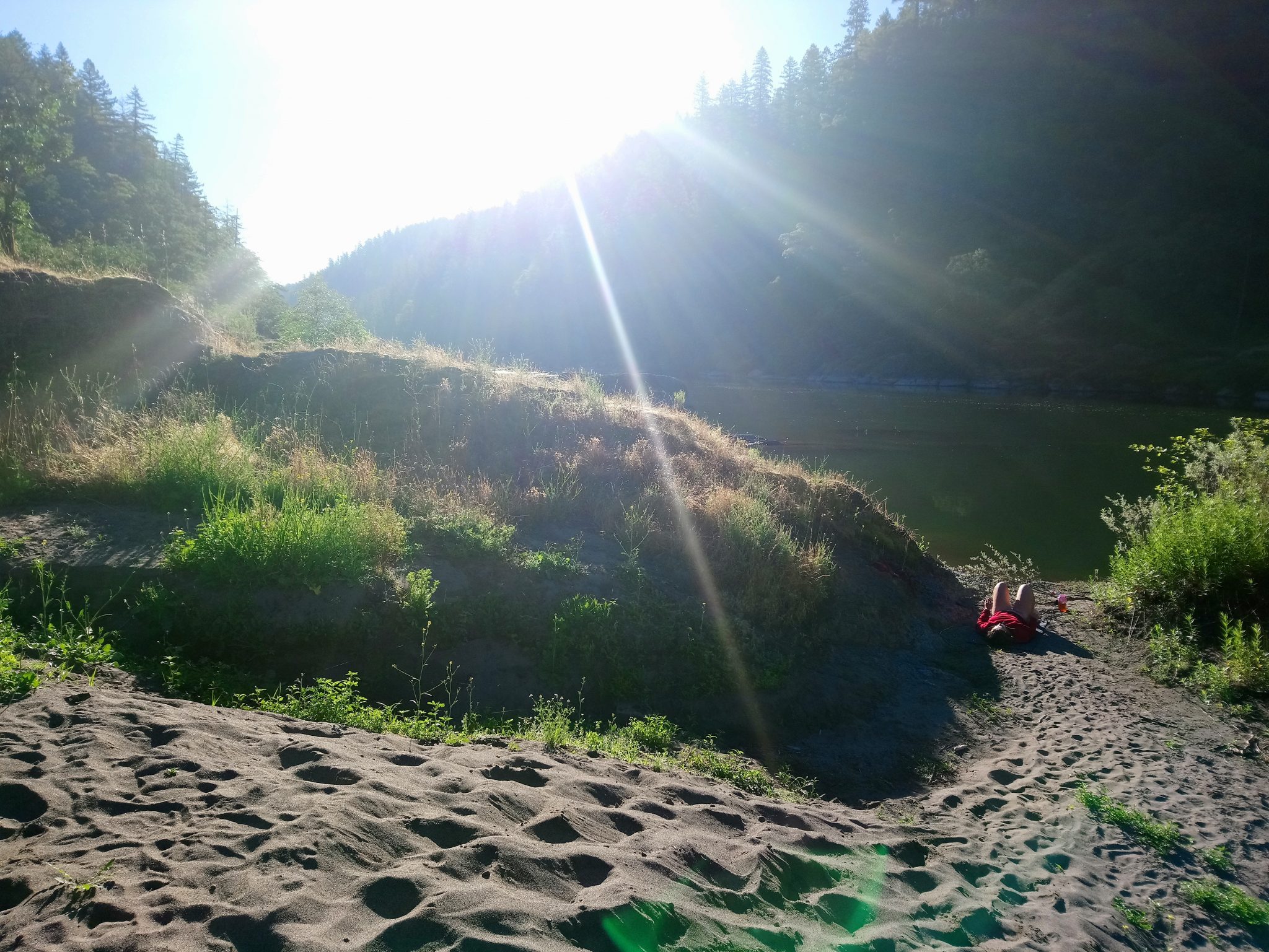 Being Saturday we spent the entire day slothing around Coyote Poop Island. Enjoying a zero day during our Shabbat each week has been a highlight of our past few trips and this was no exception. Throughout the day I read a captivating novel about the shifts in Chinese American culture by Amy Tan, “The Joy Luck Club.”

The next morning we got an early start, a desperate attempt to beat the heat. Our attempt was foiled by the allure of the Del Creek Waterfall. By the time we were done dunking in the blissful waters the sun was out and blazing. This easily became our favorite spot on the Rogue River Tail. Soon after departing from Del Creek we were lucky enough to witness a baby bear swim across the river below. We mustered another four miles before the sweltering heat of the day left us sapped and in much need of a campsite. The feeling of depletion overwhelmed me as I sunk into the hammock, that feeling led me to write a poem:

A welcome respite from the uphill strain. Long ago sun rays freed me from any motivation to move. Here I lay content, drained enough to be fooled into a false sense of serenity If only the ants would leave me alone.

Later that day we saw yet another bear on the other side of the river. Not thinking much the two bear sighting of the day we settled in for the night. It was midnight when I first hear the noises. It only took a few moments to realize it was a bear gnawing at our bear canister, about 150 feet away. Although it felt like an eternity, after several shouts of “GO AWAY BEAR” we were finally left alone. The bear decided it was not worth his effort to get into the impenetrable plastic box that smelled so good.

When we woke up in the morning from a less than tranquil night of what would be a mischaracterization to call sleep, we assessed the damage. I am really impressed with Bear Vaults (the brand that made my bear canister) ability to stay intact. Sure the holes and scratches on the lid are not ideal but overall it kept our food safe. Starting our journey back was bittersweet but we were relieved to be leaving the bears den behind. We stopped at one of our favorite spots, Del Creek. For a few hours while waiting out the midday heat we soaked in the frigid waterfall. We arrived back at our car an hour before dark, and as always with a trunk full of goodies to greet us from an incredibly eventful few days. Our next stop is a trip in Ochoco National Forest, with the hope that this dense block of what is left of Oregon’s majestic trees will protect us from the impending heat. Check out this blog post to see how it went.